The Zeiss Loxia 50mm f/2.0 lens is an incredible lens and something a bit different to review. In this review, I will compare it somewhat to the Sony Zeiss 55mm f/1.8 lens, so if you’re undecided between the two, I hope this helps.

After buying my Sony a7rII, I had a difficult decision to make: to decide between buying the Zeiss Loxia 50mm f/2.0 lens or the Sony Zeiss 55mm f/1.8. There are now even more 50mm lenses available e.g. the 50mm f/1.4 and the 50mm f/1.8 nifty fifty. The Sony Zeiss 55mm f/1.8 lens makes a more modern looking image; I don’t believe it looks sterile as per peoples claims, but the Zeiss Loxia 50mm f/2.0 feels different, looks different and behaves differently. 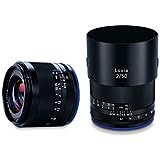 The Zeiss Loxia 50mm f/2.0 lens is constructed beautifully. It doesn’t have weather sealing but as with all Zeiss Loxia lenses, it has a gasket around the e-mount. This helps to reduce dust and moisture entering the sensor. It’s debatable as to whether Zeiss Loxia lenses would benefit from weather sealing throughout the entire body. When you put the Zeiss Loxia 50mm f/2.0 lens in your hand, you can instantly tell it’s a product that’s built to last–it feels well made. We shouldn’t be fooled into thinking that all metal products are built well just because they’re harder and heavier than plastic but Zeiss lenses scream quality. Even their threads are precise and the damping is perfect. The lens hood clicks into place with an ingenious ball bearing mechanism and there’s a bit of plastic in the mechanism so it’s not technically metal on metal–the barrel of the hood itself is metal though.

In my opinion, the focus throw of the Zeiss Loxia 50mm f/2.0 lens is perfect. It’s arguably superior to the Zeiss Loxia 21mm f/2.8 lens as it requires twice as much rotation to go from the closest focusing distance to infinity–this makes precise movements easier–but in all honesty, you shouldn’t struggle to focus any of the Zeiss Loxia lenses. It’s a smaller lens than the Sony Zeiss 55mm f/1.8 lens–noticeably so–which might make it uncomfortable to hold without the hood but with the lens hood attached, it’s an extremely comfortable setup. Combined with any of the Sony e-mount full-frame cameras e.g. Sony a7rII, Sony a7sII, Sony a7rIII, Sony a9, etc. or even the APS-C cameras e.g. Sony a6400, Sony a6500, etc. it looks and it’s a beautiful combination for street photography with a full-frame e-mount camera.

The lack of autofocus might matter depending on the subject but it’s definitely a skill you can hone with time. It’s incredibly easy to manually focus Zeiss Loxia lenses in comparison to any manual focus lens on a DSLR, because of the focus aids.

I bought this lens immediately after buying my Sony a7rII. I didn’t have many lenses to pick from and I wondered whether I would want autofocus in this focal range. In the end, my decision wasn’t really swayed by this but by my plan to hike the Pacific Crest Trail (2650+ mile hike across Northern America).

I felt that 1) I might need a lens someone can operate if they’re a stranger photographing me with my camera 2) I might need a lens I can completely cover in case it rains and still be able to use it i.e. not have to have a second hand on it for auto focusing 3) I need something comfortable. The Sony Zeiss 55mm f/1.8 lens is more comfortable to hold, in my opinion. It’s longer and the weight is distributed more evenly. Holding the Zeiss Loxia 50mm f/2.0 lens feels uncomfortable at times, if you do not use the lens hood.

I later sold the Zeiss Loxia 50mm f/2.0 lens. But I bought a Zeiss Loxia 21mm f/2.8 lens. I realised how useful it was to have the lens hood on and use it as a rest for my fingers. The lens hood does not rotate when you rotate the barrel of these lenses to focus; therefore, you can rest your fingers after focusing and not interfere with your focus. The Sony Zeiss 55mm f/1.8 lens is a fabulous lens, it truly is. But when I realised I wasn’t going to be hiking the Pacific Crest Trail, and I could overcome the issue of comfort simply by using a lens hood, it made me question my decision. I craved the Zeiss Loxia 50mm f/2.0 lens and bought it again.

The Zeiss Loxia 50mm f/2.0 lens is just slightly better at most things excluding sharpness (at small apertures it’s slightly sharper though). I loved the Sony Zeiss 55mm f/1.8 lens, but the chromatic aberration was worse, the focus breathing was annoying at times, the colours weren’t quite as good and I don’t believe it’ll be as durable in the long run. The Zeiss Loxia 50mm f/2.0 has a slightly shorter minimum focus distance i.e. you can make your subject slightly larger, than the Sony Zeiss 55mm f/1.8 lens too.

Mounting and dismounting the Zeiss Loxia 50mm f/2.0 lens is simple but it is often done incorrectly—some reviewers have said that you should hold the lens near the aperture ring. This means you have to grip it unnecessarily hard. Do not do this. The easiest way to mount or dismount any Zeiss Loxia lens is to simply turn the focus ring to infinity or closest focus, and then twist as you normally would. Zeiss have confirmed this method won’t damage or “unscrew” anything.

There are generally two aspects associated with flaring, one is lens glare–this can be put into the frame deliberately as an artistic choice, and isn’t necessarily a negative–the other is reduced contrast. For example, if you shoot a lens at the sun, you’ll notice everything else looks slightly less sharp–this is because the contrast has been effected. The Zeiss t* coatings help to reduce both lens glare and contrast issues while simultaneously improving colour balance.

The chromatic aberration of in focus areas are more controlled on the Zeiss Loxia 50mm f/2.0 lens compared to the Sony Zeiss 55mm f/1.8 lens, but in real world use you may not notice it depending on what you like to photograph. In my opinion, 50mm is a usable focal length for landscape shots, although people won’t refer to it as a “landscape lens”, and I think the Zeiss Loxia 50mm f/2.0 lens is better suited.

The bokeh is noticeably superior at close focus distances due to the lack of an aspherical element but this is subjective.

Immediately noticeable upon comparing the two is the focus breathing–the Sony Zeiss 55mm f/1.8 lens focus breathes a LOT. I wouldn’t be surprised if it’s between 45mm to 55mm. Focus breathing is the focal length change associated with changing focus from closest to infinity, for example, the focal length at the closest focus position on a lens might be 100mm but when focused to infinity, a lens might be 110mm. I haven’t measured the Zeiss Loxia 50mm f/2.0 lenses exact focal length shift but it is far, far superior to the Sony Zeiss 55mm f/1.8–for videography that’s important.

The conclusion we should reach regarding image quality is that the colours, chromatic aberration, focus breathing, sharpness, contrast, micro-contrast are incredible. The bokeh is subjective and depends on what you’re photographing; objects further away can leave a background with slightly “nervous” bokeh.

The first two photographs here were taken at f/2.0 and the last one was taken at about f/4.0. In my opinion, the bokeh is quite nice at such distances :).

All lenses mentioned in this review are in many cases superior to the competition–including the DSLR competition, too. You won’t really find a lens like this for a DSLR. There is a comparable lens for the Leica m-mount but it isn’t completely as good, most likely because it’s not quite as modern.

In short, this lens is brilliant.  I’m not a huge believer in “Zeiss Pop”, I think anything physical can be measured objectively; however, it is hard to deny that the look of this lens is different to the Sony Zeiss 55mm f/1.8 lens. Both lenses are extremely good. If I were to be pedantic, I would say the Sony Zeiss 55mm f/1.8 is slightly sharper wide open but not quite as sharp with the aperture closed down–the sharpness on both is good enough that it’s not worth fussing about with extensive examinations.

I’ve uploaded some photographs. They’re terrible but for review purposes I find these types of shots quite useful to judge certain characteristics. I think they show the “3d pop” people speak of (I am a sceptic regarding this phrase too), and being unedited, you should be able to judge some things like the bokeh and colours. I do not advise judging sharpness from tiny JPGs.

Here are some other photographs. I applied a preset to the second two, so the colours will be different. These are not good photographs, but I hope they’re good at demonstrating certain qualities of the lens.

Photochirp.com is a participant in the Amazon Services LLC Associates Program and eBay affiliate programme; these are affiliate advertising programmes designed to provide a means for sites to earn advertising fees by advertising and linking to amazon.com & eBay.com.

As an Amazon Associate I earn from qualifying purchases. Please read the Privacy Policy page. I am also a Capture One Pro affiliate partner.

This site uses Akismet to reduce spam. Learn how your comment data is processed.

Any cookies that may not be particularly necessary for the website to function and is used specifically to collect user personal data via analytics, ads, other embedded contents are termed as non-necessary cookies. It is mandatory to procure user consent prior to running these cookies on your website.