Here is a list of cameras I recommend; either I use, own, have used, have owned or I know someone who has one :). I tend to get asked a couple of questions semi-regularly: “is photography expensive” and “what camera should I buy?” There are so many cameras at all different price points which makes it difficult to answer questions helpfully. Photography is pretty expensive to start with, but it can be fairly cheap after that–unless you get a lens buying addiction. All hobbies I know of are pretty expensive when you get interested in them enough :). For example, a Broncolor Move 1200 L lighting kit will cost you £6,000 or so, but equally you can spend £100 on a flash light if you’re just starting out.

I know a lot about full-frame (large sensors, approximately 35mm in size) cameras but I don’t research cameras at the £100 price point very often. That said, I know what sort of thing to look for in a camer so if you have any questions about a specific model, let me know and I’ll do my best to help.

You can temporarily save money, time and effort with a camera that doesn’t have a changeable lens. You might think it’s bizarre of someone with an expensive, “professional camera” to recommend such models, but I have heard of so many people that’re happy with their non-professional camera that it’s worth mentioning. 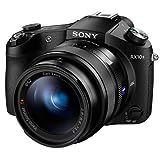 The Sony RX10 II has a large sensor which means it’s great in low light, it can do 4K video and most of what a YouTube photographer/videographer would want. It’s relatively “cheap” for what you get (there’s currently a cashback reward too) but if you end up really loving photography and you want to invest more into the hobby, you will pay more as you’ll need another camera and additional lenses. If you have roughly £900 to spend, you don’t want to spend more in the future, and you want the best bang for your buck, you should look at this model.

The Sony DSCRX100M5 is a high performance camera for its size, weight and it will give you good results for landscape photography. It is incredibly lightweight and if you’re thinking of hiking something like the Great Divide Trail or the Pacific Crest Trail, and you’re not much of a photographer but you have a decent budget, I would look at this camera. I think it’s a shame to go on a long hike and not take loads of photographs, but I understand those that don’t want to take a large camera with them. In my opinion, these two models beat the competition considerably right now.

Interestingly, if you’re thinking of spending slightly less, I would actually look for an interchangeable lens camera–the Sony a6000. If you want to increase your budget later on, the Sony 10-18mm f/4.0 lens is a stellar, lightweight, compact landscape lens but it is pricey. It also works well on the full-frame models, such as the Sony a9. You can get the Sony a6000 with a kit lens and have a semi-decent general combination but you’re really not going to get much below £450. In fact, below this price point, I would start to look at the cameras on a phone a bit more.

Personally, if I wanted the lightest landscape camera without delving into full-frame, I would get the Sony a6000 with the 10-18mm f/4.0. The Sony a6500 is an all around better camera, it’s not too much heavier and it’s undoubtedly worth considering but I think you’ll get better results out of a Sony a6000 with a better lens than a Sony a6500 with a worse lens.

What makes the Sony a6000 so good is its price, performance and size. At higher pricing points e.g. the Sony a6500, there are better cameras e.g. those made by Fujifilm. However, at said pricing points, I believe you should be more focused on a full-frame camera…

The Sony a7rII is a great, lightweight, mirrorless full-frame camera. It has been superseded by the Sony a7rIII; however, it’s currently quite “cheap” (relatively speaking) and you’ll get a much better bang for your buck with the Sony a7rII and a decent lens than you would a Sony a7rIII with a poor lens. Nonetheless, the Sony a7rIII has features that benefit the landscape photographer considerably e.g. better battery life and dual card slots. It is my favourite camera to date (excluding the Sony a7rIII) and I’ve found it a joy to use. Being able to charge and power it from a USB source help set it apart from the larger Canon/Nikon competition. The Sony 16-35 f/2.8 G Master lens is considerably lighter than the Sony 24-70 f/2.8 G Master lens.

I realise this page consists of nothing but Sony cameras. However, due to the fact you can power/charge them from a USB source (this saves weight as you don’t necessarily have to bring a charger), and their great sensor design, it’s really hard to ignore them in the compact/travel market.

Sony a7rIII is like the previous model with a few enhancements that’re worth the price premium, in my opinion. Dual card slots, better weather sealing, better battery life and USB-C.

Photochirp.com is a participant in the Amazon Services LLC Associates Program and eBay affiliate programme; these are affiliate advertising programmes designed to provide a means for sites to earn advertising fees by advertising and linking to amazon.com & eBay.com.

As an Amazon Associate I earn from qualifying purchases. Please read the Privacy Policy page. I am also a Capture One Pro affiliate partner.

Any cookies that may not be particularly necessary for the website to function and is used specifically to collect user personal data via analytics, ads, other embedded contents are termed as non-necessary cookies. It is mandatory to procure user consent prior to running these cookies on your website.